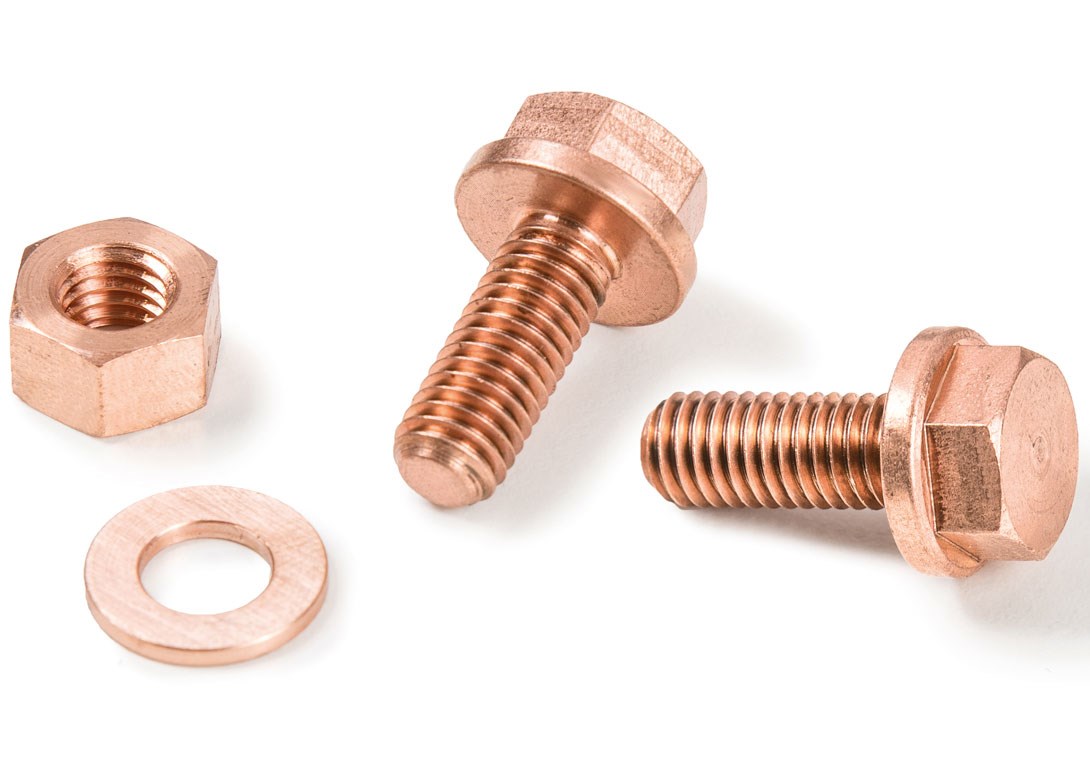 In addition to ultra-fine wires, cables and stranded wires made of ISA-CON®414, Isabellenhütte is now also manufacturing semi-finished products/preliminary materials for fasteners, such as screws and bolts, made of ISA-CON®450, another version of the copper-based alloy – helping to reduce electrical resistance and thus heat development in the system.

Both types of material, ISA-CON®414 and ISA-CON®450, are characterised by a high strength (similar to that of stainless steel) and high conductivity (similar to that of copper). With ISA-CON450, the tensile strength is between 450 and 550 megapascals and the conductivity is 80% IACS (International Annealed Copper Standard). This combination makes the material ideal as a conductive fastener, for example as a bolt, screw, spring contact, plug connector or bus bar.

Problem solving with ISA-CON®450
When problems occur when using fasteners made of steel – for example, due to excessively high performance loss and heat development or due to space problems or too high of a weight – using the ISA-CON450 alloy is a worthwhile alternative. With current carrying components, the electrical resistance, both in the material as well as at the contact transition, is reduced compared to steel. This reduces the loss in performance significantly and the weight and diameter of components can be reduced. The direct connection, for example as a bridging of a distance between two bus bars with a supporting function instead of a steel bolt or pin for a plug contact, is a promising application. 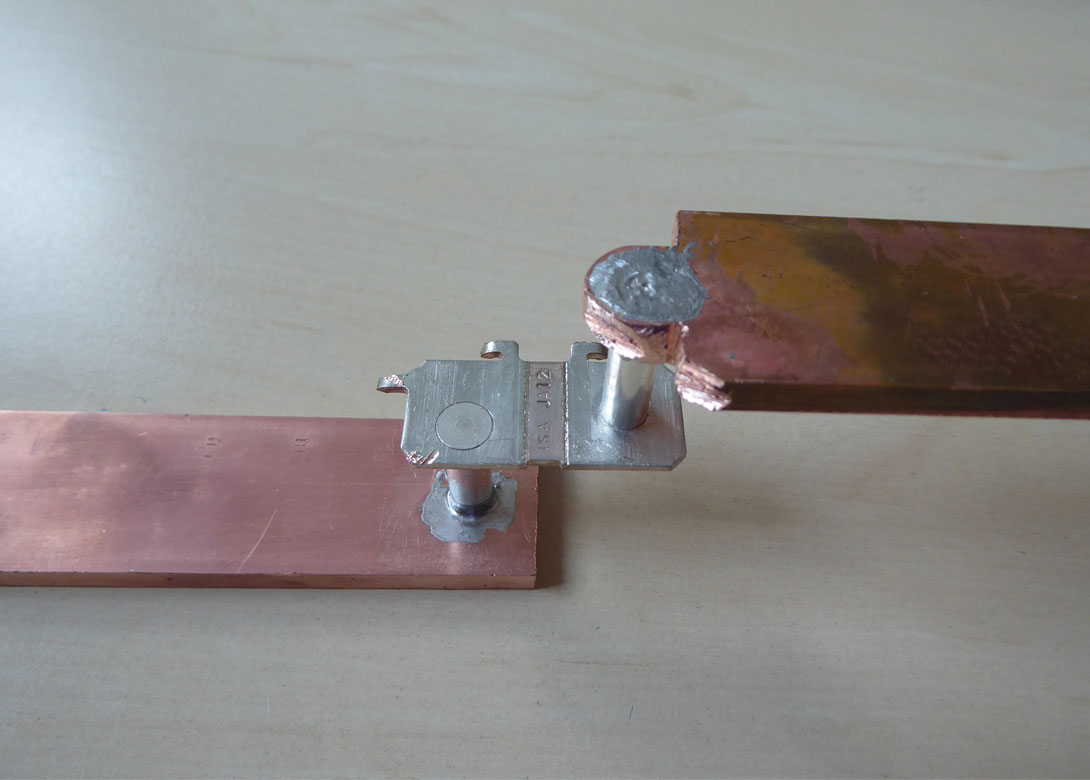 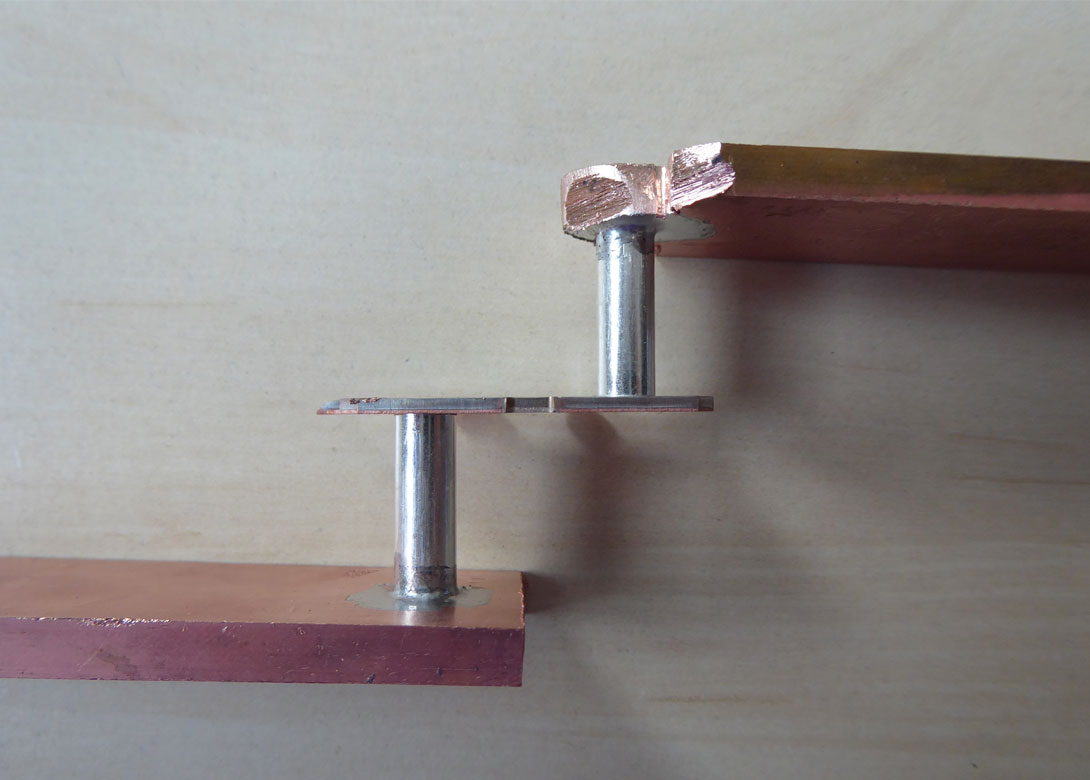 Heat reduction by 50%
The requirements for the bolt application were a significantly reduced electrical resistance and thus a significantly reduced heat development of the bolt itself. Direct use here means that the entire current is conducted directly via the ISA-CON450 bolt, which connects a shunt resistor with a plug (see images on right). Thanks to the high conductivity of the alloy, there is only low electrical resistance with correspondingly reduced heat development in the contact bolt. In addition, the heat development, which usually occurs in the shunt resistor, is dissipated better and is thus overall reduced by 50% compared to a component with a steel contact.

ISA-CON450, like ISA-CON414, is also heat resistant, which means the bolt retains its mechanical strength in applications with higher ambient temperatures. Current carrying components made of steel – that take quite a bit of effort to cool or that have to be significantly oversized to ensure sufficient conductivity – can simply be replaced with ISA-CON450.

Mechanically supportive fasteners made of copper also often have to be oversized in order to comply with mechanical loads.

Cross-sections can be reduced while maintaining the same level of safety due to the increased strength of ISA-CON. This allows for a reduction in weight and space, which is, for example, usually very relevant in the automotive sector. 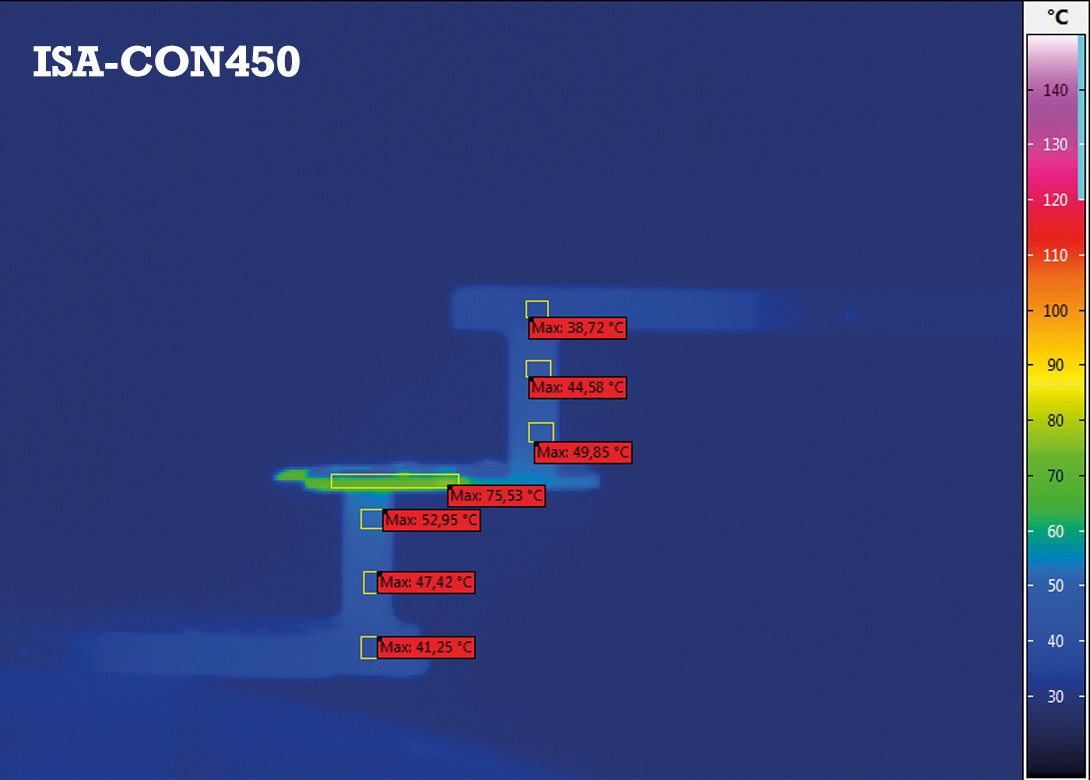 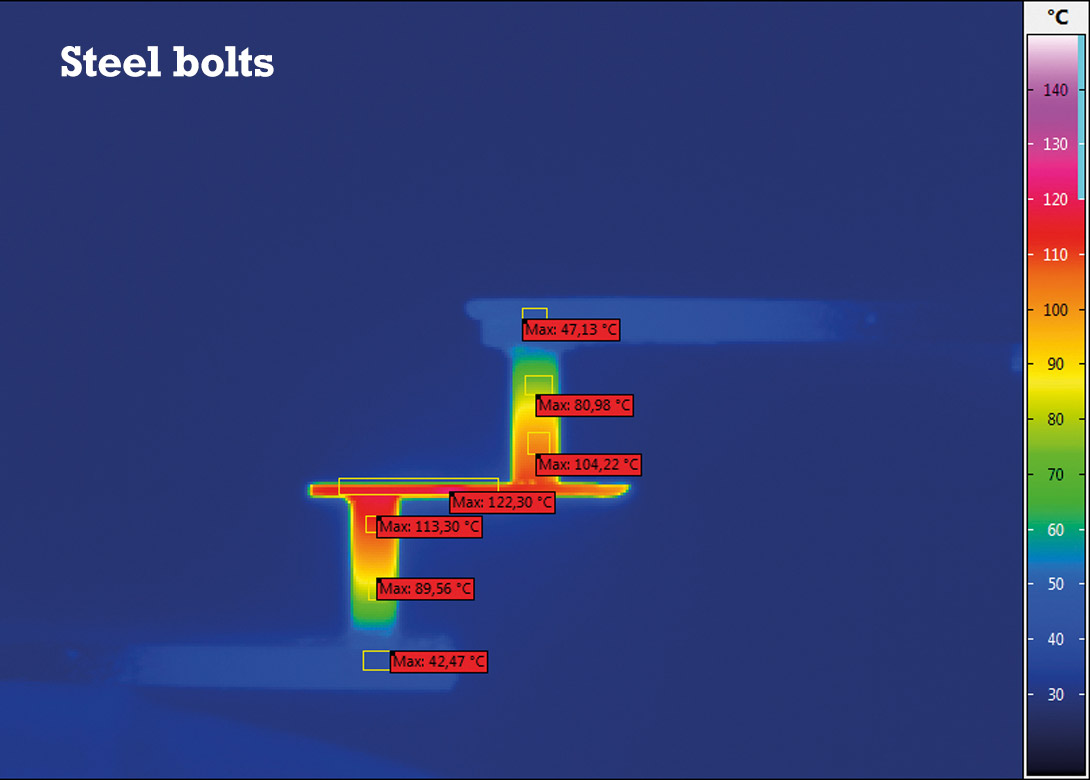 Comparison of heat generation in a resistor by using ISA-CON450 bolts and steel bolts with load of 300A as an infrared image.

Screws for indirect use
An indirect connection replaces a previously non-current-carrying component, such as a steel screw, which presses a contact onto a bus bar. The pressed contact surface here, and thus the component surface, can be reduced – since part of the current can flow through the screw. The screw offers additional safety due to its high conductivity.

Positive feedback from users
The customer feedback at Isabellenhütte has been very positive so far. The direct use of ISA-CON450 bolts in particular has a very good cost-benefit ratio. “If heat development, electric conductivity and contact resistances are insignificant in application, steel or simple copper alloys, such as bronze or brass, may be sufficient. However, if the aforementioned problems occur, ISA-CON450 is an ideal problem-solving alloy,” states Mr Brockhaus, business development manager at Isabellenhütte. “The alloy is of interest for all types of mechanically stressed plug connectors, which require high conductivity and a high level of reliability.”

To analyse the heat generation in a resistor, four different loading increments were used – 150A, 200A, 250A and 300A. The load time takes 30 seconds and during this time an Infrared video recorded the temperatures, the results are below: 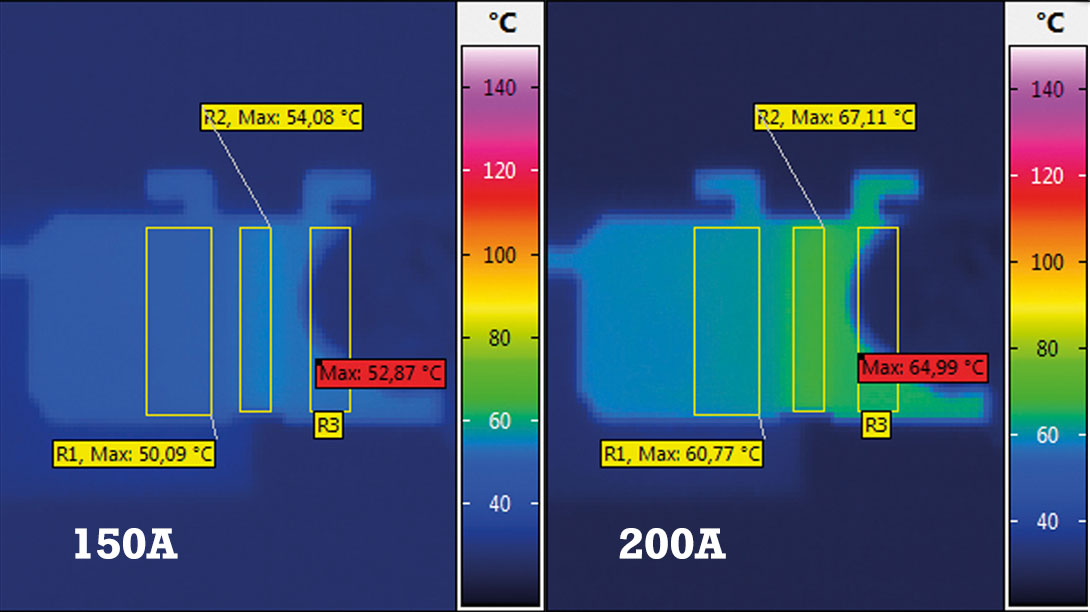 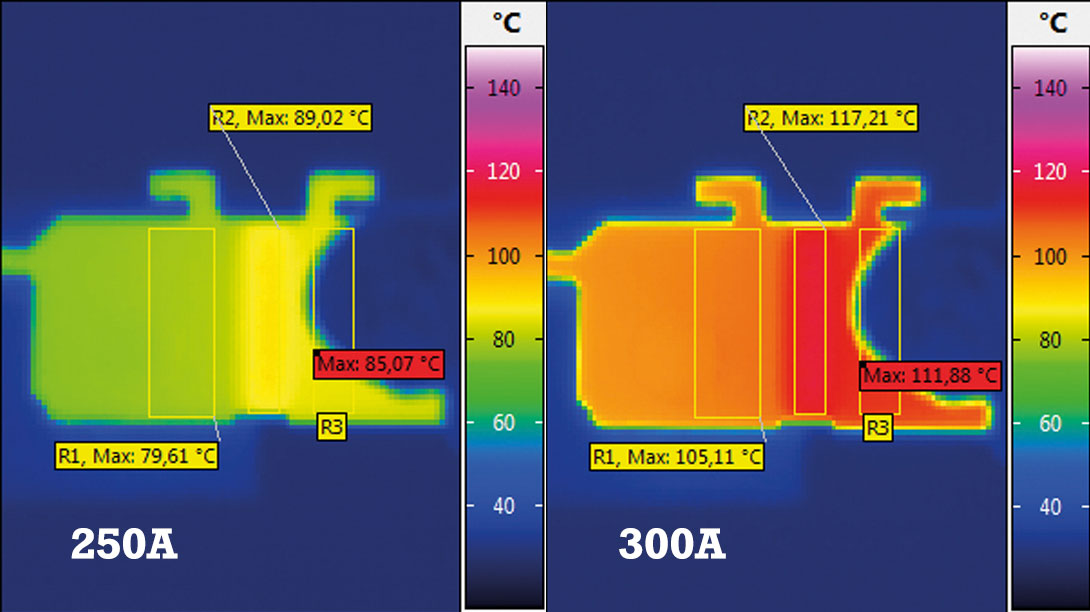 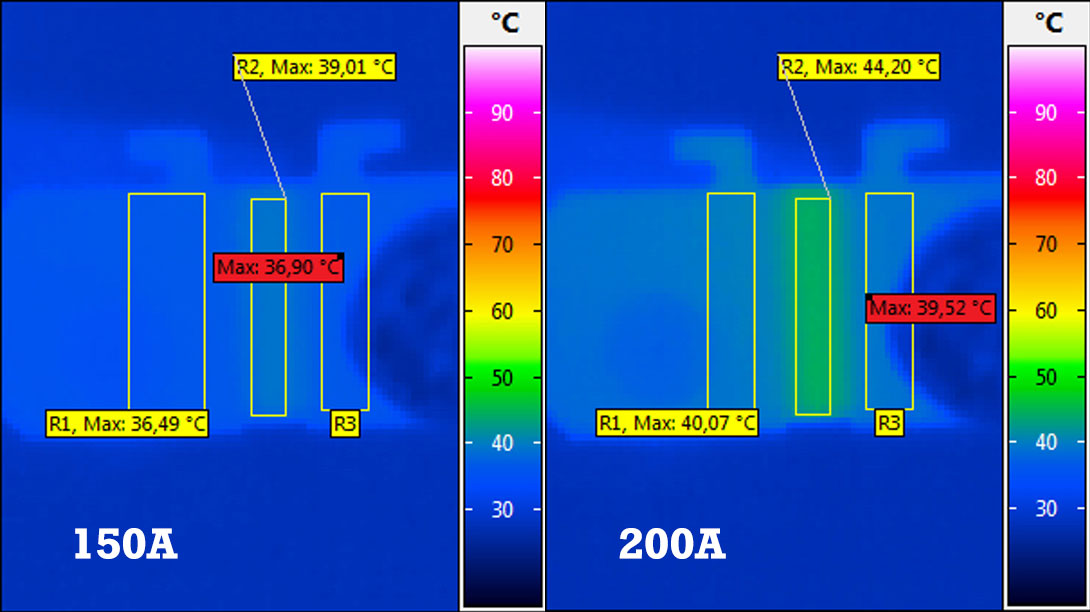 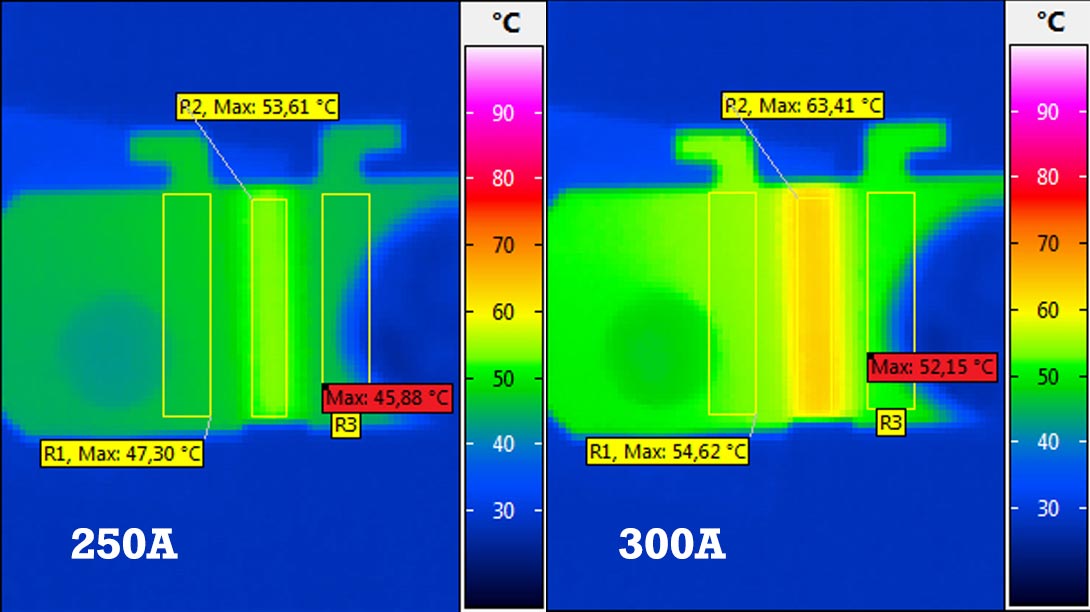 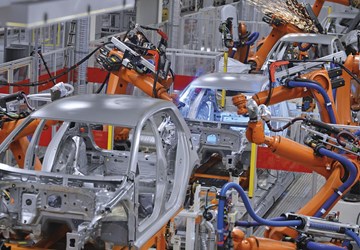 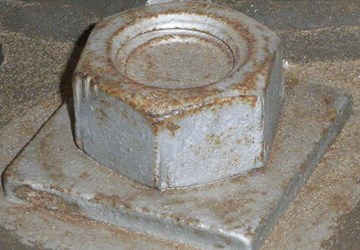