The evolution of the perfect plug 02 August 2019

The world’s first wall plug, patented in 1911 under the number 22680/11, changed the technology of finishing works for good, ultimately becoming the very foundation upon which the Rawlplug® brand was founded, but also gave birth to a completely new perception of the fixings and fasteners sector.

Everything started more than 100 years ago. In 1910 the British Museum was being prepared for major refurbishment. Following the technological innovation of that day and age, the museum had decided that the electrical system planned to be fixed to the façade should be concealed from the visitors’ gaze and installed in such a way as to avoid damaging the existing masonry.

The question was how, since the only applicable method available at that time was to chisel out a hole in the wall, fill it tightly with a piece of wood and screw a fixture to its surface.

John Joseph Rawlings – at the time running a small electrical engineering company with his brother – created the world’s first wall plug consisting of a brass strap press-formed to create four threaded sections. The sections were then put together and placed with a screw inside a hole to eventually expand under the screw’s impact.

The real breakthrough was the application of fibre, which turned out to be a perfect material, mainly for its elasticity and durability. Hemp and string were arranged along the mandrel and bonded with adhesive. Rawlings’ simple yet spectacular invention solved thousands of problems of the then construction sector at the same time, automatically making Rawlplug® one of the world’s watershed inventions.

But it was the world’s first wall plug, patented in 1911 under the number 22680/11, that changed the technology of finishing works for good, ultimately to become the very foundation upon which the Rawlplug brand was built. 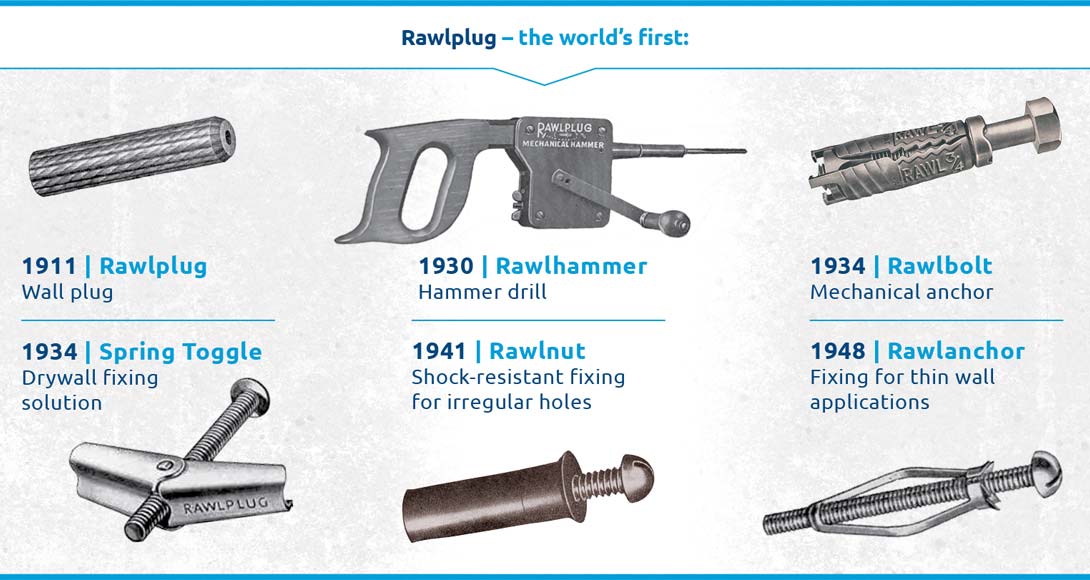 Is universality a positive or negative feature?
Irrespective of the sector, one of the most important and topical contemporary consumer trends is specialisation pertaining to both products and services available in the market. The higher the specialisation, the more efficiently and adequately specific challenges are addressed.

In the sector of fixings, fasteners and tools, such expectations are particularly relevant, because they encompass a wide spectrum of areas determining the product selection criteria adopted by architects, engineers and contractors – from base materials, to installation applications and methods, to different variants of technical parameters. However, among the product categories the sector considers most crucial – including bonded and mechanical anchors, façade and roofing insulation fixings, foams and sealants, passive fire protection systems, fasteners or manual and direct fastening systems – there is one which can be generally claimed to provide truly universal solutions. This category is lightweight fixings. Is universality a positive or negative feature?

Depriving the construction industry of lightweight fixings would be like severing one of the sector’s limbs. There is virtually no construction sector without light and medium duty applications, and it is precisely for them that these products have been designed. Similarly, there is no interior finishing professional in the world who would do without common wall plugs, hammer-in fixings, drywall fixings or frame fixings at work. Regardless of the market, lightweight fixings are the bread and butter of professional construction works as well as do-it-yourself jobs.

“It is the versatility of lightweight fixings that makes you focus on developing only a few key solutions, catering to the needs of diverse construction jobs and universally suitable for different substrates, instead of designing dozens of specialised products intended for very narrow and specific applications,” comments Karol Szczuka, brand manager at Rawlplug.

“Under each of the six product subgroups in our portfolio of lightweight fixings, all of which completely satisfy the current market needs, there is a unique leading item that meets the most stringent technical criteria and mechanical strength requirements, while at the same time guaranteeing universality of application in all construction substrates.”

Included in this portfolio is the UNO wall plug, which has just reached the peak of popularity in the UK market, but at the time when it was being launched its exceptional innovativeness raised objections among consumers accustomed with the traditional solutions they had been using for decades.

The reason for that was the particular way in which the UNO expands in the substrate. The most commonly used wall plugs expanded starting from the tip being driven into the base material, while Rawlplug’s solution represented a completely different, literally opposite approach, as it starts expanding at the outer extremity.

“We had built strong foundations to claim that our solution was trustworthy, which is why we encouraged consumers to test the UNO by installing it in any chosen base material, in either a newly driven or an existing hole, along with any chosen wall plug offered by the competition. Strength tests had explicitly shown that our product’s advantages were unquestionable, and that was but a prelude to further demonstrations of the versatility and universality of this solution,” says Remigiusz Misiak, DIY&POS manager at Rawlplug.

Also available, the FF1 frame fixing from Rawlplug comes with an abundance of advantages including the special polyamide formula accountable for its superior parameters in substrates of all categories according to ETAG 020: A, B, C and D.

This means it can be successfully used to ensure load capacity analogical to that which only bonded or mechanical anchors can deliver, which is unprecedented in the category of lightweight fixings. The only difference being that, unlike the anchors, it is suitable for many different substrates, including concrete, clay and sand-lime brick, both solid and perforated, as well as hollow lightweight concrete block or aerated concrete.

Focusing on the operating needs of users and proving there is space for specialisation amongst universal solutions, the FF1 frame fixing is versatile as it comes in numerous variants of diameter, length, head type or corrosion protection system.

Another example of products dedicated to specific applications is the TAP-IT metal hammer-in fixing for plasterboard, intended mainly for the UK market on account of the high popularity of thin wall panels among British building contractors.

When dealing with such a delicate base material, in order to minimise the substrate damage risk, an optimum product should be easily dismountable, at the same time ensuring the installation hole gets completely concealed. 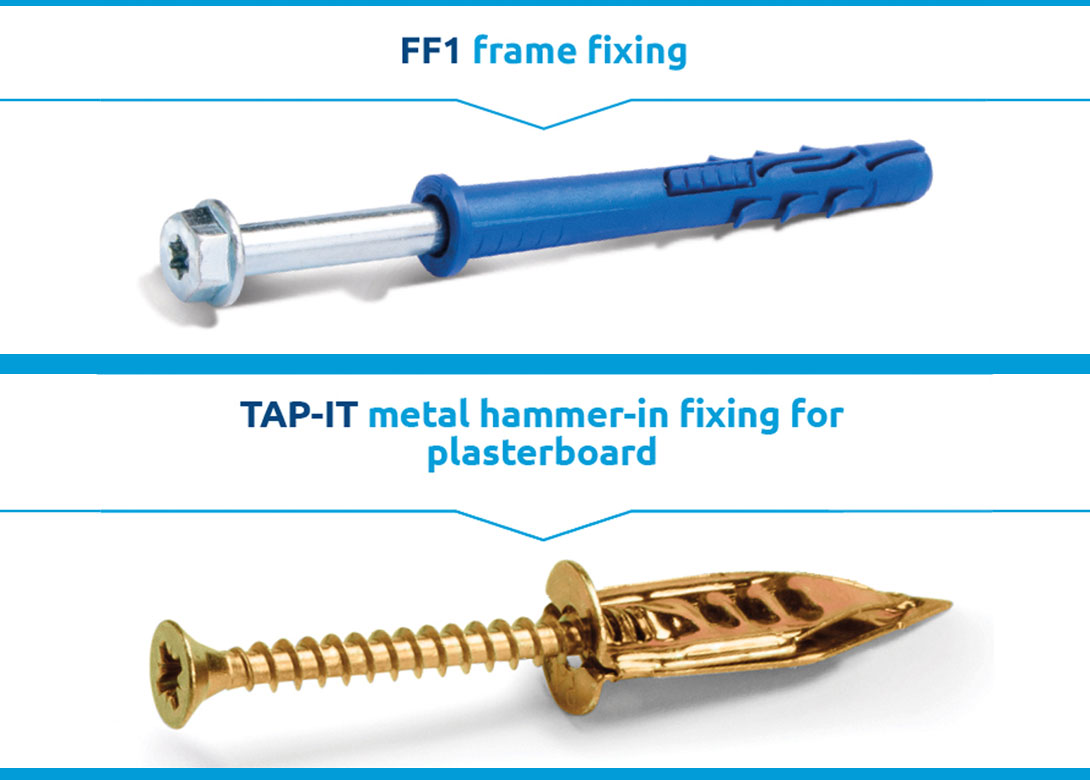 The evolution of the perfect plug
The world’s first wall plug patented by John Joseph Rawlings triggered a true revolution in the construction industry and went down in history. Although a lot has changed in this sector, for more than 100 years, it has invariably been the space for inventors.

“Good is by far not enough. This is why we are working towards the evolution of our products on a daily basis, making sure our customers can make the most of technological progress, continuous improvement in terms of reliability and innovative design, whose common denominator is comfort combined with simplicity. This evolution has made us the experts we currently are,” comments Radosław Koelner, CEO of Rawlplug. 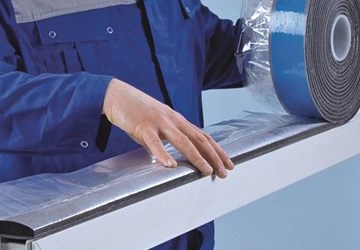 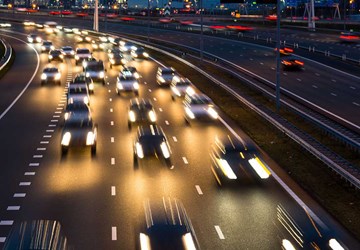