In its 40 years of operations, TLM Srl has been able to observe an unmistakable tendency on the fastener market. European manufacturers of fasteners, nuts and bolts have experienced increasingly lower profit margins, while competition with Asian producers remains critical. Labour in Asia is abundant at much lower costs, there is more favourable taxation and less restrictive constraints compared to EU regulations.

The need has thus arisen for European companies to produce large quantities using machines that are reliable over the long-term, as well as being easy to use and quick to equip, to simplify operators’ tasks.

To offer this possibility to fastener manufacturers, TLM has calibrated its machines to produce parts – above all special parts – at an above-average cruising speed. The company has given priority in its projects to reliable mechanics without electronic complications, which would require expert intervention in the event of default. Good mechanics are accessible to everyone, while complex electronics require a specialist.

Moreover, it is wrong to assume that an electronic synchronism can easily replace good mechanical kinematics. Even if the new generations find it more instinctive to type on a touch screen rather than carrying out accurate mechanical tuning, TLM says its machines – which are not strictly electronic – offer something more than the competitions’ machines.

Both machine parts are made of electro-welded steel. After welding, they are normalised so as to eliminate the stresses of the welding itself.

The reason why it was decided to construct two structures and not a single monolithic structure is due to the fact that almost the entire mechanics of the machine reside in the rolling machine head. For this reason, TLM takes particular care of all processing and finishing.

TLM states that it is the only manufacturer that grinds the rolling machine head to obtain precision, parallels and squares in the range of one hundredth of a millimetre (0.01mm). The bronze plates where the slide carrying the threading tool moves are fixed on the ground surfaces, and this technology allows for tighter tolerances on the screws produced – guaranteeing even better precision in the machined piece.

The slide carrying the threading tool is built in high resistance Ergal aluminium and finished in steel plates. During rolling machine head composition, the reaction block is coupled in a forced manner and then jointly welded so as to create a single body that is integral with the structure of the head.

This offers the enormous advantage of greatly reducing structural bending and collapsing during rolling, because in the case of reclaimed screws or screws that have been thermally treated, the rolling deformation requires many tonnes of load.

The machines are equipped with an additional lubrication system for hard screws or screws with a great deal of deformation. The additional lubrication system is composed of a control unit that maintains pressure so as to ensure a genuine hydrostatic bearing to maintain oil during slide sliding and to counteract the load generated by rolling – guaranteeing longer sliding component life.

Furthermore, the oil is recovered and filtered by the control unit, which then sends it back into circulation. The drive that controls screw insertion into rolling is completely mechanical and mechanically connected to the rod linkage that moves the die holder slide.

Since the insertion of screws into the rod linkage is mechanically connected, the user is sure to always insert the screw in the same position between the dies (tools) – ensuring that the threading phase is maintained. For this reason, TLM has never changed to electronic insertion solutions, which are rather delicate and unreliable.

TLM states: “We are the only manufacturer that offers such a complete range of machines, with the added value of being able to combine different types of machines to ensure cascade functioning processing, optimising production times and reducing costs.”

“The solidity, accuracy and precision with which TLM rolling machines are built have made the company a leader in the sector, highly appreciated by the largest producers of fasteners and screws in general.” 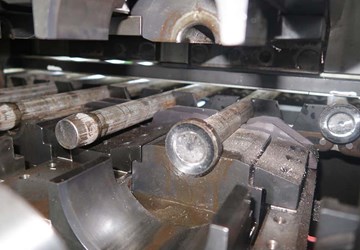 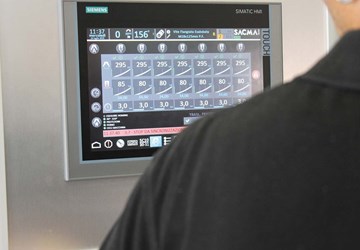